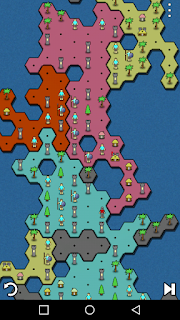 This strategy game is very simple and easy to learn, but satisfyingly challenging. It's a bit like chess in that there is no randomness. Stronger units always defeat weaker, but cost more to build and maintain. It's elegant in its simplicity: combining economy, fighting units, and defensive buildings, all distilled to their most simple form.  The AI is decent but not great. The challenge comes from each new map increasing the odds against you.

My criticism is that the challenge doesn't really increase very regularly - once every 10 maps or so it's really, really hard, followed almost immediately by a map so easy it's boring. The other problem is that after a while it all gets a bit repetitive, since it's always the same rules and units, just different maps. That said I've played over half of the 100 maps and it still draws me back in. Did I mention it's free and has zero ads?

I was a huge fan of advance wars on the gba. There aren't many games like that on Android, but this one scratches the same itch despite being entirely different.