This phone looks relatively premium but only cost $100 direct from China (but I did have to wait a full month for delivery). It features the tall + narrow form factor (18:9) first popularized by the Samsung S8, but without the curved LCD edges. At 147.5 x 71.5 x 8.3mm, it is only 3mm wider than the S8, and otherwise identical in size, but because the LCD doesn't curve around the edge of the phone the display is a full 0.3" smaller, at only 5.45". The phone body/back is made of plastic and is perhaps slightly slippery, but no more so than your typical phone.  For the price it's an impressively large LCD in an impressively small and easy to hold phone. 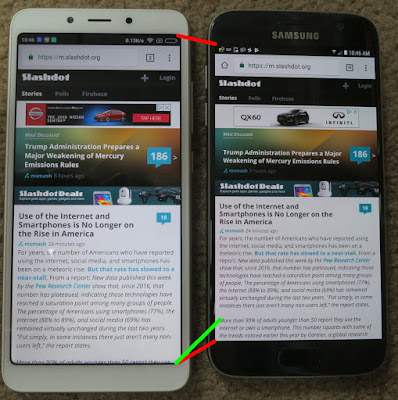 The LCD looks great, with great viewing angles as is the norm for IPS. It's plenty bright for indoor use, but perhaps a bit dark in full sunlight outside. The resolution is only 720 x 1440, half of the S8, but frankly that's plenty sharp. I think higher resolution screens are mostly specsmanship, and I'm glad Xiaomi "cut" that corner in the name of price. Even the tiniest of fonts are completely readable and appear sharp. What more do you want?

On the flip side, the tall+narrow form factor allows a published screen size of 5.45" which sounds quite large, but doesn't deliver as much screen area per inch compared to the 16:9 form factor older phones. In this photo I'm comparing the 6A (left, 5.45") to the Samsung S7 (right, 5.1"). The red lines connect the respective corners of the two screens, showing just how much taller the 6A LCD is. Yet the S7 shows about 3 more lines of the webpage (green line). To be fair, it looks like the Chrome defaults result in a slightly larger font on the 6A, so with font tweaking the 6A might at least match the S7. To be even more fair, however, the 6A isn't showing the android navigation buttons, which I turned off for fun. Put those back on and the S7 wins hands-down due to it's hardware buttons that never occupy LCD space. While the 6A has a fairly narrow bottom bezzle there's clearly space for hardware home/back buttons down there. So while the the 6A has a very nice form factor that fits in my hand perfectly, it's no better than the older-style S7, which is 1mm narrower, less tall, AND has larger top/bottom bezzles, but still manages more usable screen space. All hail hardware buttons?? Ok, maybe it's just me that feels that way.

To conclude on the screen + overall form factor: it's very nice, a solid "A". In this price range it's very hard to beat. The differences between this and the "dated" S7 design clearly come down to taste. Xiaomi did a great job here, though if I were in charge of design I would have made different tradeoffs.

The Xiaomi android skin is called "MUI9" and I had heard many not-so-nice things about it. But in fact it's perfectly fine. Perhaps its been toned down, but it's really not so different from stock android and only in neutral or positive ways so far as I can see. One nifty feature is gesture navigation, which turns off the screen-wasting ever-present back/home buttons. Swipe up from the bottom to go home, or swipe up and hold to get to recently used apps. Swipe from the screen edges inwards (either side) to go back. It mostly works, though "go back" is not always recognized and can instead cause apps like maps to scroll around and lose your place. I'm giving it a solid try but I'll probably go back to on-screen buttons.

Another nice feature is that you can have the phone display the current bandwidth consumed in the taskbar. It's interesting to see how much data is being pulled down all the time even when I'm looking at a "static" webpage. In general it seems like MUI9 mostly just adds tweaks that you can choose to enable or not. So I'm going to rate it "A", too.

Ironically for a "phone" review I almost forgot to discuss call quality. Well it's fine. Just as good as any other phone I have used with T-mobile.  Clear and plenty loud. I didn't want to burn thru all my data for the month but it did seem like the data speeds were slower than my S7, which makes sense: the 6A does not support as many GSM bands. On the other hand I don't have great T-mobile support at my house, despite living in a city. In general this is a weakness of the 6A: even though it's a GSM phone it doesn't support every band that a domestic phone would. And no Sprint/Verizon support at all.  I'm giving the phone a tentative "B" here - more testing would have been nice, but since my main carrier is Sprint I don't have the option.

From here on out things get less positive. What about performance? The MediaTek A22 (mt6762) quadcore runs at 2ghz, but those of you that recall the Pentium 4 know clock speeds are not all. The geekbench score is 816 single core, 2382 multicore. Interestingly, that's about the same as the snapdragon 800, also a quad core. For a more modern comparison, the snapdragon 430, a 8-core cpu, gets about the same mulicore performance from just 1.4ghz. Actually, I'm impressed that it benchmarks so well, because I find the webpage scrolling a bit jerky. Not slow exactly, but it stutters and the term "butter" doesn't come to mind. But hey, I'm comparing to a Samsung S7 here. Not fair! But I also have a LG Stylo 3 with a Snapdragon 425, and that's smoother too. That's a pretty fair comparison, and one that on Ghz alone you would expect the 6A to win. To be clear, this is a webpage issue only: scrolling in apps or the home-screen is indeed "buttery". And furthermore, the loading of webpages is perfectly snappy. The geekbench renderscript result, 1686, which measures GPU performance, was halfway between a snapdragon 425 and 430, which doesn't explain the jerky scrolling one bit. Conclusion:  For the price it's quite good. But certainly not premium. "B".


How about multimedia? Youtube works smoothly and glitch free. Full-screen playback doesn't actually fill the screen, however, leaving black bars on the sides, because of the 18:9 aspect ratio. Yet another way in which 5.45" isn't really, but closer to a 5.0" display. Not to say the actual full-screen experience is too small, nor is this any different than for any 18:9 phone. Volume is satisfying - at max maybe too loud. But it's a bit tinny, my s7 has somewhat better bass, not that any phone does very good at that. Without going back and forth between them you'd never know. Unlike many "flagship" phones there's a real 3.5mm headphone jack, thank goodness. Overall, "A-".

What about the camera? Here I'll compare to the S7, which had best in class performance back in 2016 when it was released, and the LG Stylo 3, an mid-line/budget phone with a camera to match. These are cropped ~3x zooms, meaning you are seeing the full resolution each camera, at least when viewed at 1920x1080.

In full daylight the 6A does OK, but decidedly softer than the other two. Daylight is easy, though. 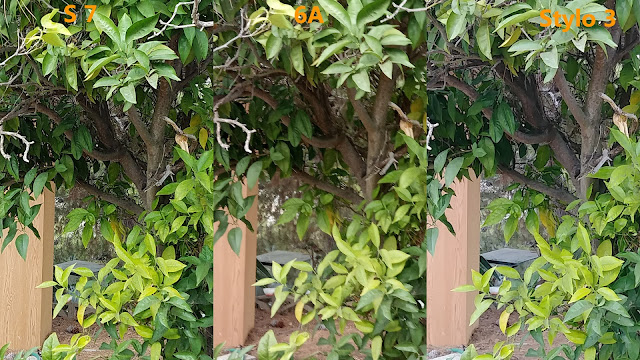 In moderate indoor light, the S7 creams the 6A, but the 6A is still usable. 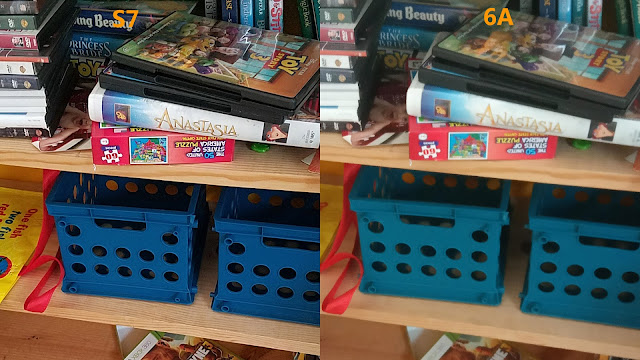 In near dark, the 6A does horrible, the Stylo slightly better, and the S7 "shines", at least for a cell camera. 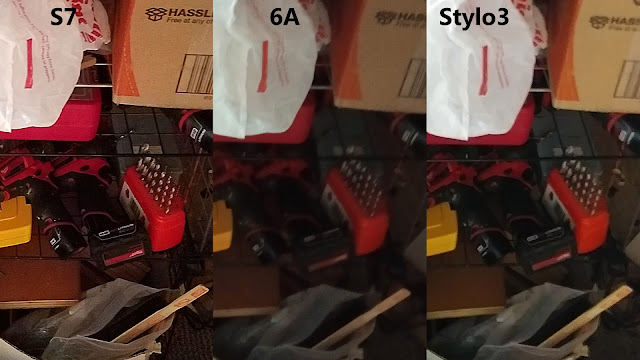 Recall that these are zoomed in photos, so the poor resolution and high blur is highlighted in these comparisons. Just looking at the photos on your phone without zooming and you'll see it too for lower light photos but not as much, and for full daylight photos everything looks fine.  Consider these two unzoomed, uncropped photos. 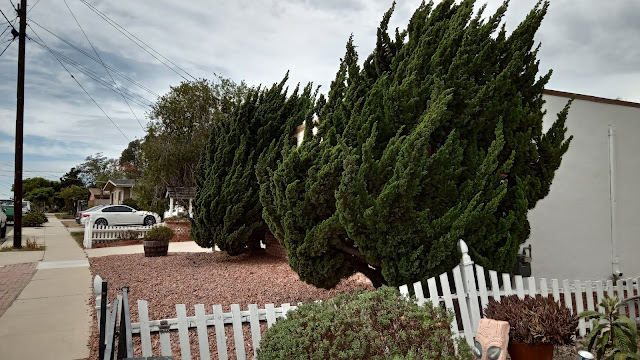 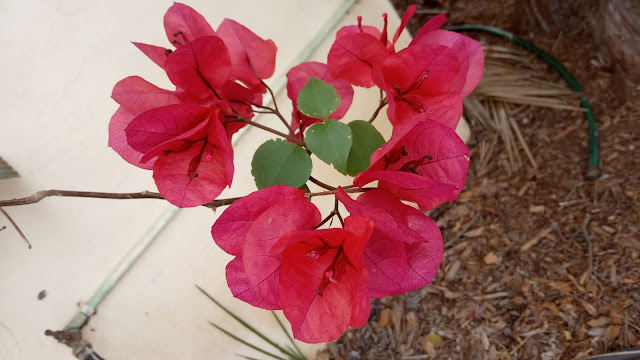 These are all the front facing camera. The back facing camera is actually a bit of a pleasant surprise. Depending on how much you like seeing your wrinkles, the 6A might be superior here. 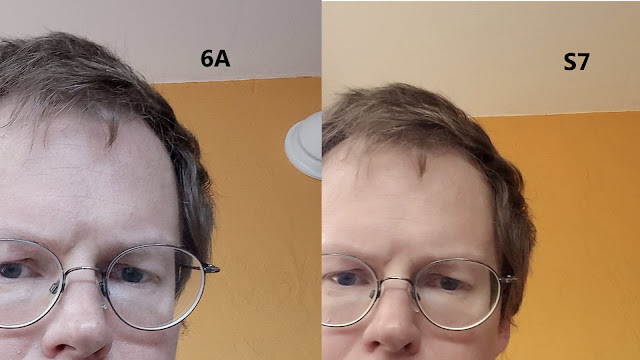 To conclude: in daylight the 6A camera is certainly good enough for social media pics. Indoor  lighting, less so. Be prepared to take multiple photos and save the least blurry ones. And in low light, forget about it! Side note: the Stylo 3 performs a lot better than I expected though nothing like a S7. Oddly enough, it seems today that the biggest difference between flagship and cheapo is the camera.

There's an MicroSD card slot, a 3.5mm headphone port, and it uses the older microUSB connector. Like many Chinese phones it supports two nano sim cards, and refreshingly, there's still space for the MicroSD card slot when both sim cards are installed!

To conclude: for $100 it's very nice. Walking into a best buy or Walmart you won't find anything nearly this nice for $100 and what you do find will be a  pre-paid phone locked to some MNVO or another, whereas this phone is unlocked The biggest downside to the price is you have to wait a month to get it from china.

If you'd like to see some video of the Redmi 6A check out this video on youtube.