The cameras on the Stylo 5 and Stylo 3 have the same resolution. But not all megapixels are made equal. Let's start with cropped images in a well-lit indoor shot so we can judge how sharp each image is. On the left is the Stylo 3, on the right, the Stylo 5.

You can click for the full-sized image. But even at this tiny scale you can tell the stylo 5 is sharper than the 3, and has better contrast (less washed out).
Interestingly, on the full-sized version of these photos the Stylo 3 made a 4.1MB file, whereas the Stylo 5 produced a 3.5MB file. More details and a smaller file to boot. So we know this isn't just a matter of how much data the camera is saving to disk (ahem, SD).

Often budget cameras show their worst side in low-light. So here's a dark room with some glare from a window. Again, cropped to the center of the image (hiding the aforementioned window) to show detail.


Even from the tiny preview it's clear there's a lot more detail in the 5. Click for larger views and you'll see just how large an improvement it is. Which is not to say the Stylo 5 is great, just much improved. My ancient Samsung Galaxy S7 still does much better (see some of my other posts for examples of this same shot on that camera).

OK, so the difference in poor light is very noticeable. What about a better lit shot? Here are two photos showing a well-lit outdoor scene with strong shadows. No cropping here; these are the original jpgs.

Both do pretty well. The 3 does a better job of preserving shadow detail (both phones had HDR on, BTW), but at a cost of looking more washed out overall. The 5 has nicer and more realistic colors. If you zoom in to 100% sized pixels, you'll see the detail level is nearly identical; certainly not enough to care about.

To conclude: the Stylo 5 is an upgrade over the 3, particularly in low light. Thus, indoor shots almost always look better. Well lit outdoor shots are not really that different between the two, though one might prefer the 3 or 5 depending on your taste. The 3 does tend toward washed out, less saturated colors in most shots. The 5 has better color and is always when there's no harsh shadows.  In dramatically lit scenes the small loss in shadow details is detectable, however, even with HDR on.

BUT: the Stylo 5 is still nowhere near flagship camera quality (even flagship from 4 years ago). It might be good enough, though.

I like how big the screen is. No question, it looks great.  The borders and bezzles are reasonably slim, too. But the phone is so big, and pretty heavy too. I actually have found myself gravitating back to my Stylo 3 because it's so much lighter and fits in my hand better.

It's definitely not a one-handed phone. Even when using both hands I find it more comfortable to cradle it in both hands, like a book. For typing this is a very ergonomic approach. And the keyboard is so wide that two thumb typing is a pleasure. In fact I'm using it now to write this and while it's nowhere near as fast as a desktop keyboard it's the first time I've found soft-key typing to be pleasant. No reason to dig out the stylus. Just tap away with your thumbs.

What's much less ergonomic is holding the phone with one hand and navigating apps/the web with the other. The weight, width, and depth just don't combine pleasently in my average-sized hands. Mostly, it's that the phone is so deep (thick) and the edges are close to square. Combined with the weight, the result cramps my hand. This is the largest phone I've used so I can't make good comparisons, but I know the Stylo 3 was just fine.

I'm also really disappointed about the stylus slot in the 5.  Unless you have unusually large nails it's lodged too deep in the phone to remove. I find myself just not using it at all. I didn't pull the stylus out of the 3 all the time but I did use it (it was really nice for some games and for drawing). It's just not worth the trouble on the 5. Partly because the screen is so large. UI widgets and virtual keys are so large you just don't need it.

The speaker volume is good, and the sound is clear enough. I'm glad it's bottom firing, as opposed to on the back - you can set the phone down and not muffle it any. 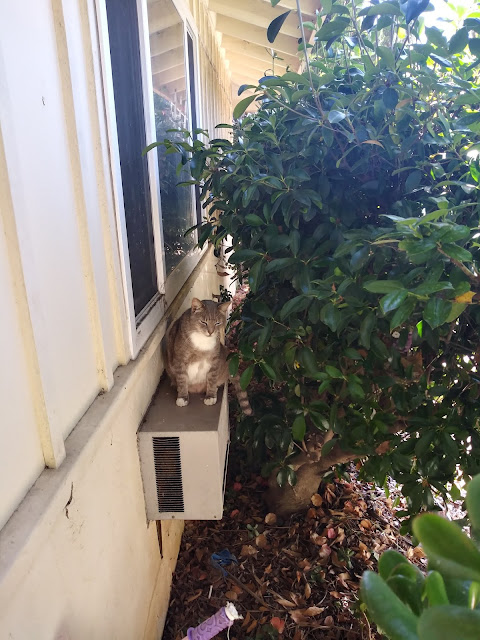 LG Stylo 5 vs the Stylo 3: a quick review after 1 full week of use

I've had a Stylo 5 for a full week. It's natural to compare it to my Stylo 3, which I've had for over a year. My Stylo 3 has been a better phone than it deserved to be for the price ($50), and I've only grown more fond of it over time. If it were just a bit faster and had a decent camera I'd be happy to use it as my primary phone.

Enter the Stylo 5, which on paper is both those things. (I skipped the Stylo 4 because it was too expensive for most of its life for what it offered). What follows are my hands-on experiences with the 5. All numbers are self-measured, using calipers or other fine instruments. Lots of websites publish inaccurate measurements. These are at least accurate to the sample I own!

So what's it like? Lots has changed, not all of it good. The screen is much taller (142mm vs 126mm).  Part of that is smaller bezels, but also the phone itself is slightly taller (161 vs 155mm). The screen is the same width in both cases: 70mm (the 5's body is 79mm wide and the 3 is 80mm). A little taller doesn't count for much, but the phone is also noticeably thicker (9mm vs 7.9mm). That doesn't sound like a lot but it feels like it. Perhaps the 3 has a more gently rounded back cover? Whatever. In your hand the 5 feels much thicker. Finally, weight. The 5 is much heavier: 180g, vs the 3 at only 149g. This I also really feel. Combined, the weight and thickness of the 5 really makes the "hand-feel" much less nice than the 3. I actually can feel my hand getting tired holding it for extended periods of time. Sorry, I guess I'm just a weakling. Maybe with time I'll grow used to it, but this is definitely the most disappointing aspect of the 5.

Let's counter that with the most impressive aspect: the screen. It's super high res, at 1080x2160, vs 1280 x 720 for the Stylo 3. That makes a difference you can definitely see in terms of sharpness. While a flagship might be even sharper, the returns are surely diminishing.  It's also plenty bright and colorful.

Performance is great. Websites load quickly and scroll smoothly. We have finally reached the age where a budget chipset is more than enough. That said developers at Google and elsewhere are always hard at work adding bloat. Luckily, the Stylo range never gets OS updates so you'll never have to experience added bloat. But you say, who cares about how it "feels". What about cold hard benchmarks? The Stylo 5 gets a geekbench score of 753 (single), 3789 (multi) when plugged in. My Stylo 3 gets 649/1815. I'd say the multi-core score is more reflective of the actual experience.

Storage. The Stylo comes with 32gb of storage. Sounds like a lot but after uninstalling what Boost bloat you can, only 14gb are available for you. In fact Boost isn't adding that much - the OS takes up a full 16gb. Thanks, Google. It's sad to think how much baggage the Android OS drags around now. Overdeveloped. That's Android. So much has changed since KitKat, and so little of it for any good reason.

Not that 14gb is so little space to play with. Certainly enough for your apps. And there is a SD card slot, so while the wastefulness of Android is offensive, in practice just spend $10 on a SD card for your music and photos, etc.

So that's my 1 week review. I'll post another more fully developed review in another week or so.
No comments:

Bubble Counter floats above other apps 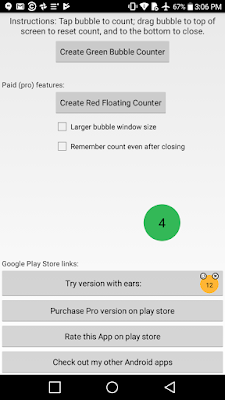 This app makes it easy to count something (reps, in my case) while using any app. If it looks familiar, it's because I previously reviewed an almost identical app that differed in how you closed the bubble and reset the count. I like the gesture based interface of this version better. The picture at right shows the settings but to be clear after you close that the green counter remains for you to position where you please. Free/no ads, but there's a paid version with more features which you should probably buy to support the developer! 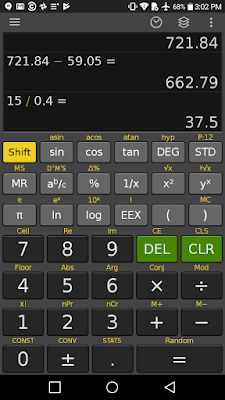 The android OS has a very basic calculator built in, but it's pretty lacking. I really like this one, which has all the normal scientific calculator features you'd expect, a good history display, and puts commas after every 3 digits, like a good little calculator.

No ads, no nags. There is a paid version for $1 that adds some features that frankly I don't miss. But it's probably worth supporting high quality work like this one.