LG Rebel 2: hands on with a decent super-budget phone (lgl58vl)

This budget phone lists for $40, but a refurb that looks 100% like new cost me $10. It's locked to tracfone, but they aren't a bad budget provider. I didn't use there service so I'm only reviewing the phone here. I'm generally pretty hard on it, but of course for $10 it is actually quite fabulous compared to any other $10 tech device that isn't a phone. Of course that's because phone economics are pretty crazy and because tracfone surely subsidizes the price.

It runs Android 6 (marshmallow) which is old but it really that doesn't matter much - any app you care about will be written to work all the way back to 4.4. I'm sure they made that choice because marshmallow is less resource intensive.

Shape: It has a removable plastic back, a removable battery, and fits nicely in your hand(73x144x8 mm). The back has a pleasing texture that makes it nicer to hold than most flagships. I prefer the feel of the Motorola G3, and perhaps even the ZTE Majesty ProPlus since both are a bit more gripy, but this is good too. Under the removable back are actual Philips screws, so you could disassemble this pretty easily (such as to replace the screen). The bezels are as large as $10 predicts and while there's plenty of space for hardware home/back buttons, they insist on wasting valuable LCD space instead. It continues LG's odd choice of power in the back, but also supports double tap on/double tap off, which works well. A-

Storage is mediocre with only 3GB free. There is a SD card slot, but the phone only supports it as portable storage (not adoptable), meaning you will have to install all apps to internal memory and then cross your fingers that you can move them to the SD card (many won't). C

Performance was OK. Webpages loaded much slower than my S7, depending on complexity, sometimes taking more than a second. But some webpages are pigs. If you didn't have a flagship phone to compare to, you'd still probably wish it was faster, but it's certainly usable. Once the page loaded scrolling was smooth - unless the page was busy loading advertisements and running complex java-script, in which case there were certainly hiccups. The modern web is an insult to the hypertext aspirations of the 90s. Interestingly, the LG actually rendered JPGs in chrome faster than on my S7. It turns out I hadn't updated chrome in a while, and after addressing that the S7 again won, though by a smallish margin. Good code maters.

With only 1GB of RAM, switching between apps was slow too. Not unusable, but certainly very noticeable coming from the S7.  Well, maybe learn to multi-task less. It's probably good for your brain. Or maybe look for lighter apps? If only the play store also factored efficiency into the rankings...

But enough about how it performs in real life - what about benchmarks?! Everybody loves benchmarks. The CPU is a lowly snapdragon 210 4core at 1.1ghz. Geekbench 4 reports 392 single/ 900 multi-core. That's about what other 210-based phones get, if perhaps a little low on the multi-core. Let's compare that to the LG Stylo 3, a 'dragon 430, which gets about 600/2500, which most people would also say is a low score, but is a pleasure to use as long as you don't compare it directly to my Samsung S7. To sum up: the synthetic benchmarks agree this is a slow phone. B-

The LCD is reasonable, at 5" diagonal, 854 x 480. Yes, it's IPS, so the viewing angles are good. On some webpages it seemed like faint lines got washed out, but viewing full-color high saturation photos everything looked fine. I decided to pit it against my Samsung S7, a fair comparison if ever there was one ;-). Amazingly, the S7 didn't always look better when viewing photos, though it frequently came out on top. It took extreme viewing angles (70+ degrees off normal) for the S7 to clearly win. Reading text at arm's length (~1ft) everything looked good and my visual acuity was more of a limit than screen resolution. At 0.5ft or less the grid of pixels started to be faintly visible producing a mild screen-door effect. I've used other low-resolution phones like the LG Volt and not had this problem, so I suppose there may be a tiny amount of space between the pixels. You get use to it and it never interferes seeing whats on the screen, but it's another mild reminder of the budget nature of this phone. A- (but read on)

One much more unfortunate aspect of the phone is that the default text size and icons seem to be too large by a significant amount - as though this is a phone for grandma (no offense!). Compared to a Moto G3, for instance (the same size screen), everything is just too big. Given how giant everything looks, I think this might actually be a bug. You can adjust the text size under settings but it doesn't scale the rest of the interface so you end up getting silly things like menus with tiny text and huge amounts of white space above and below each line. There is a fix, which is to change the DPI, which changes all display elements, not just text. But LG didn't make this available under settings, unlike other phones I've used.

Luckily there's a method to change your DPI using ADB (no root required!). If that sounds like gibberish then this probably isn't for you. Read the link for the details, but if you already know all about ADB, here's the relevant command to scale everything properly: adb shell wm density 200 (the default is 240).  The screenshots below compare the default to density 200. And good news: this setting survives between reboots. 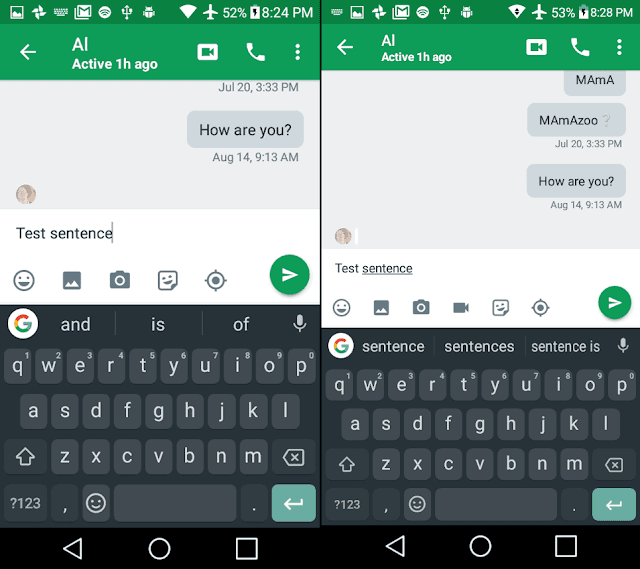 See how a tiny change in scale almost doubles how much of the conversation you can read? That said hangouts is a particularly bad user of screen space, clearly designed for premium phablets, not 10 dollar phones for the masses.

It's not just hangouts. Using the default DPI the screen feels much smaller than it is really, almost as cramped as a 4" screen,  though most apps are not as bad as hangouts. Unless you have bad vision, or know how to ADB, it's hard to recommend this phone. You might say it's a small issue that I've overblown, but recall there are thousands of phones out there. Why choose one that's fundamentally flawed? To me the crampedness is much more an issue that some tiny LCD issues or the rather slow CPU performance. F-. OTOH, it's fixable for the techies. A-

Now that I've "failed" the phone it seems silly to spill to many more pixels, but since the DPI can be fixed, let's also check out the camera. Cheap phones always have a hard time with low light so let's look there first. Below is the Rebel2 vs the Samsung S7, a top performer of it's time. To compare I'm showing a crop at original resolution (the actual picture is about 2x wider/taller). The rebel can't handle the dynamic range or dark detail very well, and it's notable less wide-angle. But actually it does kindof OK here, since there's not much detail to see anyway. 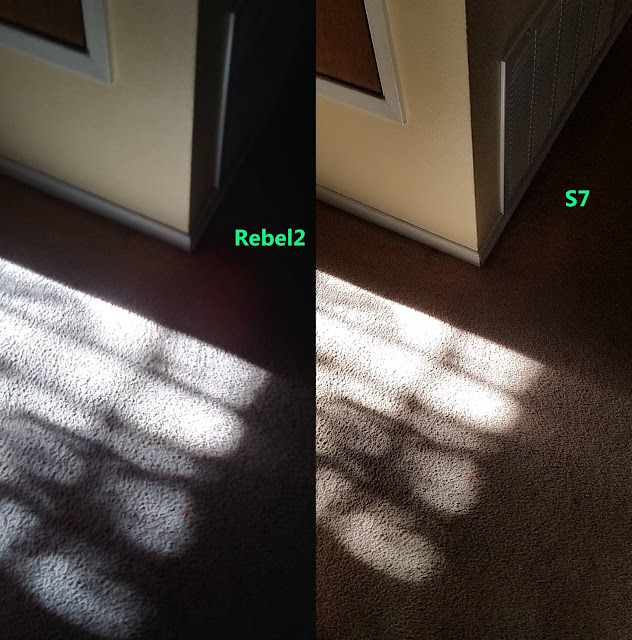 This bookcase shot, also low light, really shows how bad the Rebel is. Since there's absolutely no comparing the detail level to the S7, I also added the LG Stylo3, a mid-range phone which can't hold a candle to the S7, but absolutely destroys the Rebel2. Note that all photos were taken at the same resolution, from the same spot, so the difference in scale is due to how wide-angle the lens is. You can certainly see more if you don't "Rebel" (again?). 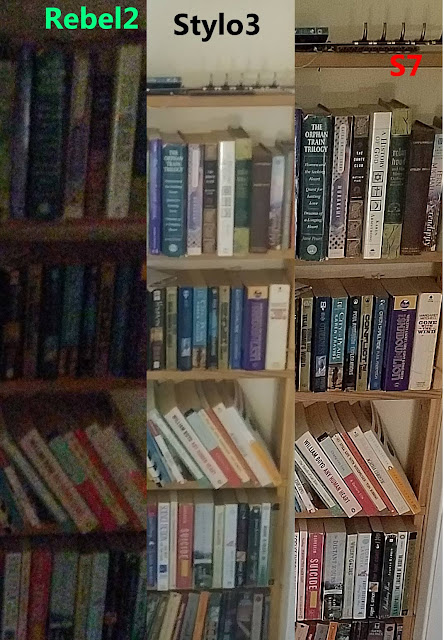 Maybe a well lit indoor shot will do ok? This next photo was taken right under a skylight. Indeed, it may not be too dark, but boy is it blurry. 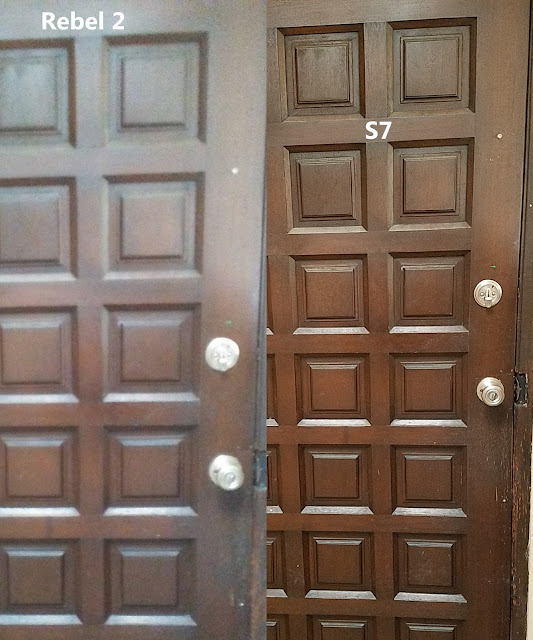 Ok I'm a horse torturer. Lets move on to an outdoors shot where the Rebel has enough light to "shine" (ha, ha).  Actually I'm quite surprised how bad it does here too. There's just no detail even when you have tons of light. I was expecting something closer to the Stylo 3: No S7 but tolerable. But the Rebel is a mess. Blurry nearly everywhere, no shadow detail, just yukkk. 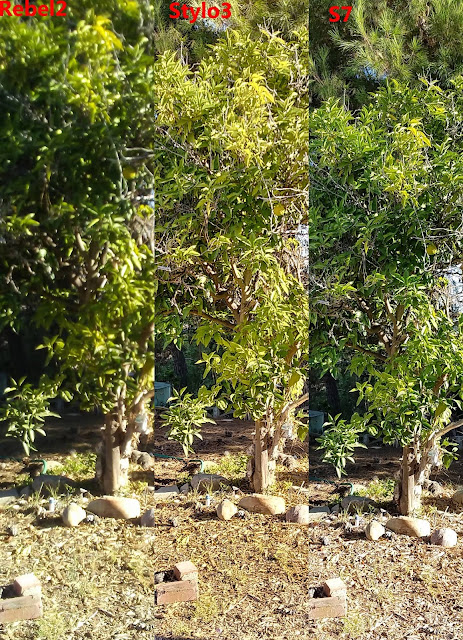 The specs claim 5MP, but I suspect it's really much lower and has digital scaling applied. Even for a budget phone this is really bad. But it probably beats my first digital camera from 2001, for one 40th the price. Progress! I mean, I'd use this instead of nothing, and I'd be glad to have it. But you'd have a hard time finding worse sold today. D+

To conclude: This phone is everything you should expect for $10. That's not even a decent meal anymore. I would have much rather been pleasantly surprised than have my expectations fulfilled, but for all my whining this is actually probably a good value for the price. But oh my goodness you could do better for just a few dollars more.